There have been five Construction Industry Surveys (CIS) by the Australian Bureau of Statistics (ABS), the most recent for 2011-12.  All five surveys found the construction industry is overwhelmingly made up of small firms which contribute most of the industry's output and account for almost all of the number of enterprises. Table 1 shows the breakup between contractors in Building and Engineering and the subcontractors in Construction services (which were called trades in the earlier surveys). The 2002-03 survey used different categories of businesses (not establishments) in residential, non-residential and non-building, and trade services and is not comparable with the other surveys. In 2002-03 there were 339,982 businesses of which 269,228 were trade services and 70,753 were residential, non-residential and non-building businesses.

In 2012 there were 186 firms employing 200 or more with 177,000 employees, accounting for 18.6% of employment and 25.5% of IVA. These long-run changes in industry structure can not only be the result of business failures, which are common with SMEs but less so for large firms. Instead, there has been a long wave of mergers and acquisitions reducing the number of large firms and increasing industry concentration. 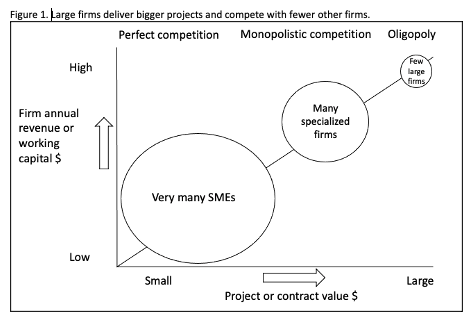