Construction Tech on the Move

Startups are Starting to Come to Market

Over the last few months there has been a series of capital raises and an IPO for Australian construction technology companies. This is a highly competitive landscape that is developing quickly with a focus on large scale procurement platforms. The table does not include the many local startups with products for site inspections and defects, safety and compliance and so on.
In a nice example of spillover effects, after the sale of Aconex founders Rob Phillpot and Leigh Jasper set up Xenoca and Significant Capital Ventures as VC funds for joint investments, and have invested in one IPO and four startups that have disclosed capital raises. Leigh Jasper has also invested with Ian Beatty and Salta Capital’s Andrew Sypkes and David Tarascio in venture fund SecondQuarter, which has raised $50m+ and has invested in Propeller (3D mapping), and ActivePipe (real estate marketing).
Leigh Jasper is also on the board of Salta Properties. Salta and Smorgon backed the modular Tribe Hotel designed by Mark and Melissa Peters and built in Perth in 2018 by Probuild, with Mantra as operator. Mantra was acquired by Accor, who announced in March 2019 plans to develop more than 50 of the modular hotels. 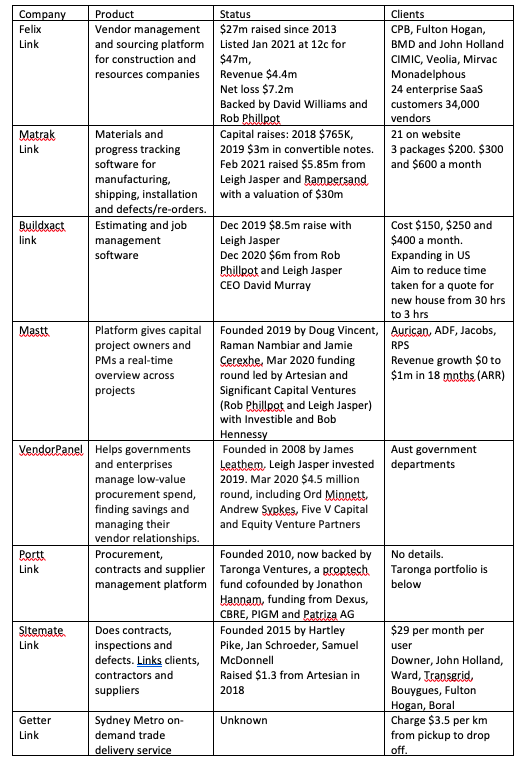 Taronga Ventures
Taronga Ventures “invests in emerging innovation, technology and business models shaping the future of the built environment. We offer direct venture investment, as well as programs and advisory services to support the growth of our portfolio companies and their impact on the traditional real estate sector.” They also have a few construction tech investments. Their RealTech fund was launched last year, the program director is Julian Kezelman. Their startups are: 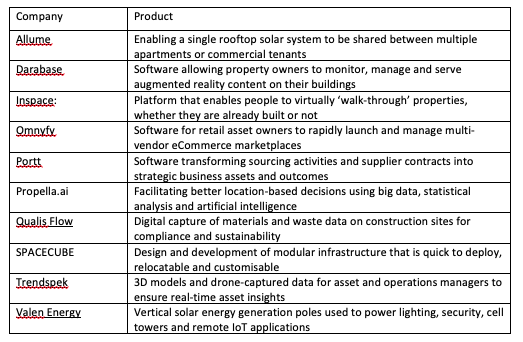 Procurement platforms are looking like the next big thing in construction tech. In the UK Pagabo launched a procurement platform in February, mainly for the public sector, using framework agreements. Here is their relevant page which says:“Benefit from streamlined procurement and best value on all your mid-sized construction projects through our National Framework for Medium Works.Running until December 2022, this fully OJEU compliant Framework can be used to commission a full range of building works, valued between £250k to £10m.Providing real value and competition, it includes 46 regional and national contractors, split across 3 project value bands. And there’s complete flexibility in how you award your contract - either Direct Award your preferred contractor or go through a Further Competition with a selected few.”
Posted by Gerard de Valence at 12:26