The issue of market power in the construction industry is not one that gets a lot of discussion, despite the associated issues of competitive behaviour and appropriate regulation. A distinctive contribution is Christian Brockmann’s ideas on collusion and corruption, where three related arguments were made. First he put forward an analysis of bidding for projects as an auction that typically results in a price below marginal cost for the winning contractor. Second, he then argues the logical response of contractors as bidders to this outcome is collusion, which is illegal. Third, he identifies the auction and bidding process as an abuse of market power by clients that should be regulated. It’s worth reviewing Brockmann’s arguments and their validity, as he provides a somewhat different perspective on the issue of construction industry collusion.

In a market with a single buyer, as with a building or construction client, it is possible to gain market power through bargaining with potential suppliers. Bargaining power is found in bilateral negotiations over terms and conditions of supply between trading partners. In a bargaining framework buyer power is the ability to extract concessions or a surplus from a supplier, typically through individually negotiated discounts. Buyer power in this case is the bargaining strength a buyer has with respect to suppliers with whom it trades, where bargaining strength depends on the ability to credibly threaten to impose an opportunity cost if it is not granted a concession. The most important issue is therefore the relative bargaining power on the buyer and seller sides of the negotiation.

Competitive tendering, in Brockmann’s view, is the exercise of such bargaining power by clients. By using an auction to select the winning bidder based on lowest price (known as a first price sealed bid auction), projects are won by bidders who are willing to sacrifice margins or have underestimated costs (the ‘winner’s curse’). In this case the ‘individually negotiated discount’ would be the difference between a contractor’s marginal cost and the market price for the project.

In a first-price procurement auction, the low bidder is awarded the contract. In a common-values auction, the cost of performing the contract is common to all bidders but is uncertain, bids are based on estimates, and this sort of auction can result in the winner’s curse. Therefore bidding estimated cost, on average, results in a loss because the lowest of several independent estimates of the true cost, on average, is less than the true value, and rational bidders avoid the winner’s curse by bidding above their cost estimates.

The problem with first-price sealed bid auctions is that increasing the bid too little results in lost revenue to the contractor while too much loses the competition. Also, the larger the number of bidders the less likely a bid at equilibrium price will win. Brockmann argues that these sealed-bid auctions have four characteristics, and in the estimating and bidding process all these effects will overlap and aggregate: 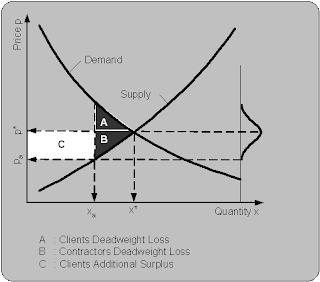 In the diagram above P* is the equilibrium (market) price and Pa is the auction price. The outcome of the auction is a price below the equilibrium price, and this augments the clients’ surplus (C) by the same amount that it reduces the contractors’ surplus. In addition there is a decrease in both surpluses (A+B), a deadweight loss, which measures the reduction of social welfare. The reason the winning bid is below marginal cost is because tenderers cannot estimate their costs accurately, due to non-systematic errors across the work breakdown structure used to get estimates. If estimating errors are normally distributed the lowest bid will be below the mean price (in auction theory this is known as the ‘winner’s curse’, where the winning bid makes a loss), which can be taken as the market price. The curve on the right hand side of the graph is the distribution of costs of the tenderers, the mean price is P*.

Brockmann concludes clients have buyer power, and the industry’s response to their use of that power is to collude in a variety of ways. Although a list is not proof, widespread evidence of collusion in the building and construction industry would suggest, in many circumstances, this can be the case. For example:


There are many other examples. Brockmann says For contractors collusion “is a business decision and the players are business unit managers” and “Individuals have only the chance to walk away from the game as this will continue to be played by others”. In his view collusion is more of a structural problem than an ethical dilemma, with large groups of contractors involved individual decisions have no effect on the behaviour of the group.

Brockmann also, uniquely as far as I know, argues for regulation of buyer power. How this might be achieved is left as an open question that he does not discuss, beyond noting the industry’s frequent encounters with competition regulators around the world. However, he does discuss the difficulty in getting people to behave ethically under these conditions of procurement through auctions and settlement through claims and variations. While collusive behaviour by contractors is illegal, he strongly believes many clients can and do behave unethically when negotiating with contractors:

Why is it ethically acceptable that buyers have such market power? Why is it acceptable they can use ‘shrewd’ negotiating tactics? Collusion is both an ethical and structural problem. It will persist as long as the institutions of procurement are not changed, giving both sides equal power and reinstituting perfect competition on the project market through regulation of the buyer’s behaviour.

This is a challenging argument that raises the role of clients in shaping the behaviour of the industry. It is also a key factor in the important issue of improving procurement processes. Nevertheless, despite the theoretical neatness of the argument on auctions and estimating errors, there are more than a few points that are controversial. Among these are:


The problems of poorly informed clients and profitless contracting have a long history, in the 1830s London builders refused to tender for many projects under the building agreement in use at the time. Even earlier, Marshall Vauban, a military engineer and builder of fortifications for the French monarchy, insisted suppliers should be selected on quality not just on price. In a letter from 1685 to his Minister he complained about buyer behaviour and delays due to budget cuts, and argued:

Breaking of contracts, failures to honour verbal agreements and new adjudications, only serve to attract those firms which do not know which way to turn, rogues and ignoramuses, and to make those with the knowledge and capability of directing firms, beat hasty retreats.

I would add that they delay and inflate considerably the cost of these works, which are the worst since these cuts and the cheapness sought are imaginary. For the contractor is ruined … He does not pay the merchants who supply the materials, pays badly his employees, cheats on those he can, has only the worst, and since he is cheaper than the others, uses the poorest materials, quibbles about everything and is always crying for mercy …

… go back to plain dealing; pay the price for the works and do not deny an honest salary to a constructor who fulfills his duties; that will always be the best deal you can find.

While this was, and is, good advice, clients and their advisers are deeply committed to tendering and awarding the contract to the lowest bid, despite the fact that it is unlikely a competitive tender will result in a fair price. The purpose of a tender is price discovery, particularly for non-standard goods, and the industry is adept at bidding low to win work then making a project profitable.

On the other hand, the widespread evidence of collusive tendering and anti-competitive practices undermines the rationale for such reliance on competitive tendering. When you get situations like Japan and Holland, where industry associations have facilitated market sharing agreements across the country, it’s pretty clear the traditional system of tendering and contracting is deeply troubled.