How Rapidly Will New Technology Spread Across an Industry?

One of the underlying ideas here is that the industry we call ‘construction’ is a ‘technological system’, a densely connected network of firms and organizations that produces and maintains the built environment. This system can be divided into three different levels (local, national and global) and three distinct sub-sectors (residential and non-residential building and engineering construction), each with their own characteristics and therefore each with their own development trajectory. The driver of these differing development trajectories will be how rapidly firms adopt the range of new twenty-first century technologies now emerging.

These technologies will greatly enhance our abilities to reorder the physical world, the ultimate purpose of a technological system. These abilities are increasing through continued improvement in hardware, both mechanical and silicon, and software, with new applications and programs and the development of machine intelligence.

How firms use technology, in the way it is adopted, adapted and applied, varies widely within the construction technological system, and this is a significant driver of change. After 100 years the construction technological system is well developed, and as a mature system it is also conservative. Mature technological systems accumulate capital and skills, and this investment in the existing system gives it great inertia until some disruptive change emerges. How and why a new technology spreads through the economy and society are determined by many factors, but studies of historical cases like steam power, tractors, electricity, phones and the internet have given us good examples of technology diffusion and its dynamics.

From economic history, we know major new technologies take time to diffuse through the economy because they require parallel changes in forms of organization, methods of production and patterns of consumption. These are not decisions firms and households make quickly or easily, due to the investment in upgrading machinery and equipment usually needed. New technologies are ‘embodied’ in this new physical capital, in the way a 20 year old car incorporates the technology of two decades ago when it was made. In the literature there are many studies of the introduction of new technologies, and the consensus is that it typically takes 15 to 30 years for a new technology to reach 90 percent of its potential market. A well-known example is Paul David’s research on electrification in the US, which took 30 years from 1900 because of the fundamental changes industry and households needed to make to take advantage of electrical power. 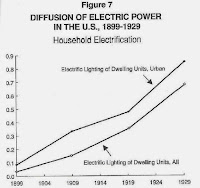 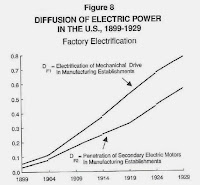 Another good example is tractors. The figure below shows the tractor slowly displacing horses and mules in US agriculture from 1910 to 1960. Horses and mules declined from about 26 million in 1920 to about 3 million by 1960, while the number of tractors rose from zero in 1910 to 4.5 million by 1960. One reason for the slow spread of tractors was the incremental innovation needed to increase their capabilities, which made them more attractive over time. A second was an increase in farm wages after 1940, which made tractors more economic. 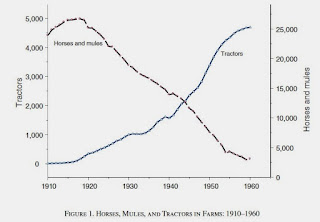 The spread of new technologies through society and the economy often takes longer than expected, based on the benefits the new tech typically brings. Paul David observed many people "lose a proper sense of the complexity and historical contingency of the processes involved in technological change and the entanglement of the latter with economic, social, political, and legal transformations. There is no automaticity in the implementation of a new technological paradigm, such as that which we presently discern is emerging from the confluence of advances in computer and communications technologies." The same could be said today about the advances in machine learning and artificial intelligence.

Generally, discussion of construction industry development over the next decade shares a view that the impacts of new technology, including BIM, will be gradual, changing industry practice over time without significantly affecting industry structure or dynamics. Given the entanglement of economic, social, political, and legal factors in the construction technological system this might be the case, however there are good reasons to think this may be wrong because these studies either predate the current surge in machine learning or do not consider the potential of AI. Machine learning, AI, automation and robotics are an interconnected set of technologies that are evolving quickly, enabled by expanding connectivity and the massively scaleable hardware available today.

Technologies have to be adapted into solutions for specific tasks, with their role in the workplace evolving over time as machines reach the levels of performance required. Only when their cost is low enough will they be adopted, but developing and engineering new technologies takes time and money. Once established, the single most important factor in technology uptake is the price/performance relationship, or the gain in productivity or other measure (time, quality, safety) the new technology delivers for a given level of investment. To successfully displace an older technology a new technology often has to provide an overwhelming economic advantage to overcome the inbuilt conservatism of an existing industry, due to the investment by incumbents in the current system. This is a significant barrier because, at present, the price/performance trade-off is not there for the many small firms in building and construction because the investment required to upgrade capability is too large for the size of these firms. However, for larger firms the issue is not whether to invest, in BIM for example, but how much, if they intend to compete in the upgraded and modified category of firms in the industry.

A period of technology-driven restructuring of the building and construction industry may be about to start, similar to the second half of the 1800s when the new materials of glass, steel and reinforced concrete arrived, which led to new methods of production, organization and management. There are many implications of such a restructuring. Some firms are rethinking their processes in response to developments in AI, robotics and automation as capabilities improve quickly and the range of new products using these technologies expands. Many firms, however, are not. Meanwhile, frontier firms are exploring new tech and pushing the boundaries of what is possible, and are inventing new processes.

There is understandable skepticism across the industry about the extent of impact of new technology, the ‘business as usual’ approach has worked well for many firms. With the characteristic changeability of construction sites particularly challenging for automated and robotic systems, it might take decades of investment for machines to learn how to do site work. On the other hand, once a robotic system has learned how to do something, that skill can be copied and replicated at minimal cost, and that applies as much to engineers, architects, quantity surveyors, urban planners and project managers as it does to crane drivers, bricklayers and electricians.

A profile of 16 industries that contribute to the construction, management and maintenance of the built environment. This research is based on the annual ABS publication Australian Industry, and covers 12 years of output and employment.
The 2019 report can be downloaded here
Industries included in the BES:

I studied politics, philosophy and economics at Sydney University and worked in the private sector for a decade before becoming an academic in the School of the Built Environment at the University of Technology Sydney, thinking I would be there for a few years. Over twentyfive years later I am still at UTS, and now spend a month or two a year teaching at UCL’s Bartlett School of Construction and Project Management in London.